20 Creative Ways to Tie Your Shoes

Shoelaces are so simple, yet there are over one trillion ways to lace a shoe. Journeys.com has created an infographic with curated fun, functional, and creative ways to lace your shoes! 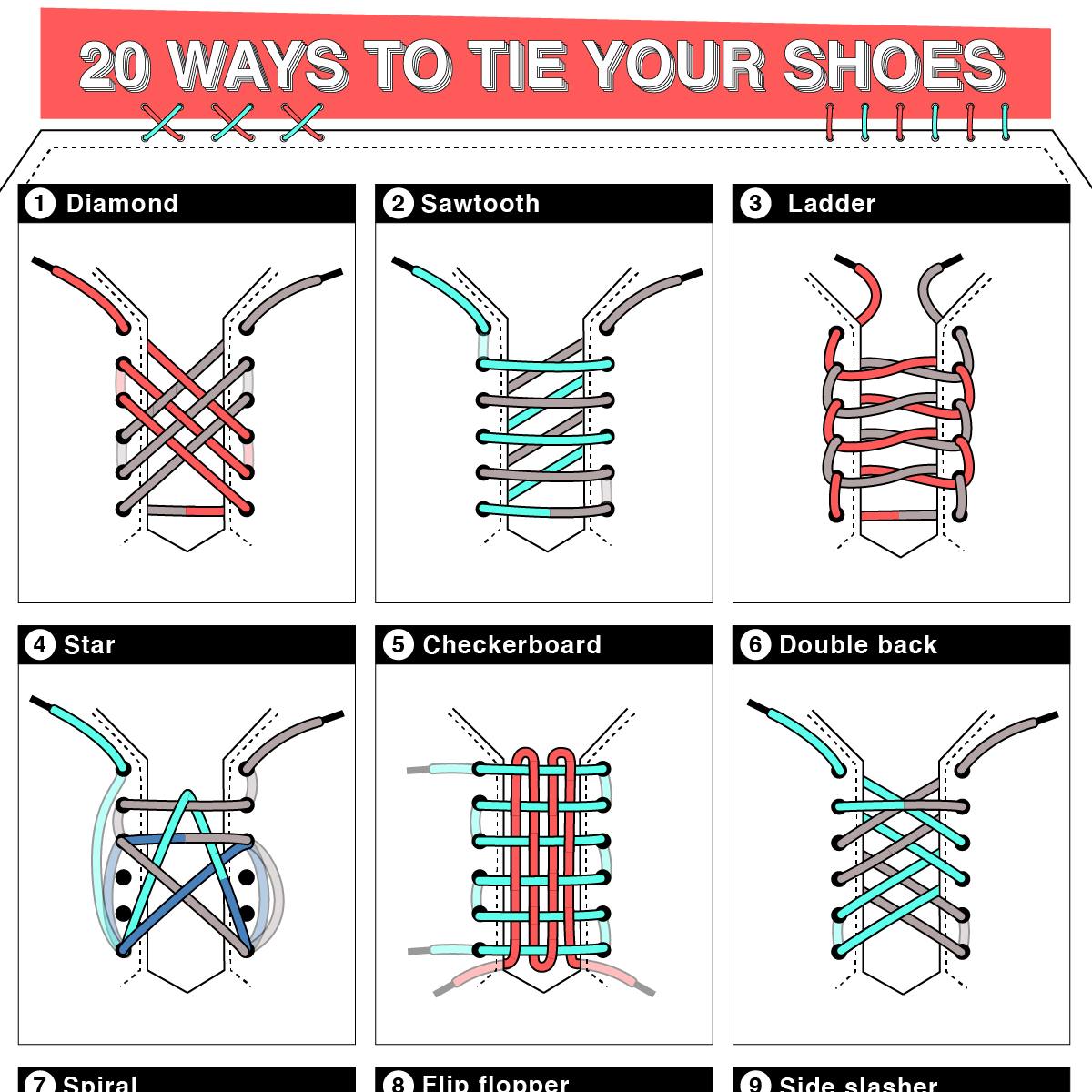 What Is the History of Shoelaces?

The history of shoelaces is shrouded in mystery. Due to the quickly deteriorating material typically used to create shoelaces, it has been challenging for archaeologists to determine the exact origins of shoelaces. The oldest known leather footwear, known as the Areni-1 shoe, was found in 2008 in the Areni-1 cave of Argentina. This 5,500-year-old shoe was found laced with leather shoelaces that were slotted through rudimentary eyelets cut into the hide. Archaeologists marveled at the complex construction and similarity to modern lacing systems. The cool and dry conditions of the cave and a thick layer of sheep dung created the ideal environment for preserving the leather material.

Another example of ancient shoelaces belonged to Otzi the Iceman. Otzi is a naturally mummified man who is believed to have lived between 3400 and 3100 B.C.E. He was discovered in the Ötztal Alps in September of 1991, making him Europe’s oldest known natural human mummy. He was adorned in a cloak crafted from woven grass, along with a coat, belt, leggings, loincloth and shoes all constructed from various forms of hide. His shoes were reproduced by a Czech academic who stated, “Because the shoes are actually quite complex, I'm convinced that even 5,300 years ago, people had the equivalent of a cobbler who made shoes for other people." However, a more recent analysis conducted by British archaeologist Jacqui Wood determined that Otzi’s shoes may have actually been the upper parts of snowshoes. The laces were comprised of a hemp-and-rope net that cinched together the hide.

Researchers have found evidence from as early as 2000 B.C.E. of the Greeks and Romans fastening their shoes with leather laces, particularly around the ankle. Buskins are knee- or calf-length boots crafted from leather or cloth that are laced from the toes to the top of the boot. Hunters and soldiers in the ancient Greek, Etruscan, and Roman societies wore them, particularly to protect their legs from thorns and dirt. Byzantine emperors were formally adorned in purple buskins that were embroidered in gold with double-headed eagles.

More modern iterations of shoelaces can be found in brogues from the 16th century. While brogues are a form of stylish and formal footwear today, they had their origins in Ireland and Scotland in the 1500s. Early brogues had the signature perforations in the sides that helped with drainage as men worked in wet, muddy bogs. These brogues were fastened with buckles, but they eventually evolved to have lacing systems that offered more ankle support, especially for soldiers during the 17th, 18th, and 19th centuries.

When Were Shoelaces Invented?

Although shoelaces have clearly been used in one form or another for thousands of years, they were not formally invented until 1970, when Englishman Harvey Kennedy took out a patent. Although shoelaces were not a novel idea, he introduced the aglet. The aglet is the metal or plastic cap on the ends of a shoelace that protect it from fraying and make it easier to thread the shoelaces. This feature revolutionized shoelaces and brought them closer to what we use today.