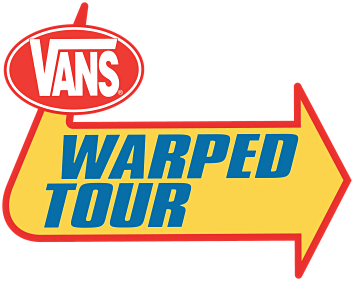 Dating back to 1995, the Vans Warped Tour was a rock tour that traveled around the United States and Canada every summer. Known as "punk rock summer camp," this mobile music festival was the biggest one in the United States, and it also had the distinction of being the longest-running music festival that has ever toured in North America. Initially, the festival was simply called the Warped Tour. But in 1996, shoe manufacturer Vans started sponsoring the festival. Although the music was primarily punk rock, other music genres have been included in the festival, too.

What Was the Vans Warped Tour?

The Warped Tour began as a skate-punk music tour with third-wave ska music heavily featured in the lineups. Eventually, the music morphed to feature predominantly pop punk and extreme metalcore. Because the festival traveled to various sites, the concert layout changed with each venue. The festival rolled into town, setting up early in the morning and tearing down at the end of the evening.

Origins of the Vans Warped Tour

Kevin Lyman and Ray Woodbury created the Warped Tour in 1995, and this was the first year it toured. Initially, Kevin Lyman wanted to call the tour "The Bomb" because it was going to be so cool. Unfortunately, on the day Lyman was going to announce this name, the Oklahoma City bombing occurred. Lyman changed the name because he thought his first choice would now be too disrespectful. In 1995, the tour kicked off at the Idaho Center in Boise, Idaho. That year, the Warped Tour ended in Detroit. Most of the time, the Warped Tour was held at outdoor venues, although a few times, it was held indoors due to special circumstances.

Vans started making shoes in Anaheim, California, in 1966. This shoe manufacturer has always been associated with extreme sports and the rugged skater style of shoe. Eventually, Vans was fully invested in skater style, and BMX riders often chose their shoes. Vans began sponsoring athletes engaging in these sports, and a Vans skate park opened in 1998. Because Vans had become associated with extreme sports and punk rock, sponsoring the Warped Tour seemed like a perfect fit. In 1996, Lyman was scheduled to meet with Calvin Klein about a potential sponsorship for his festival, but a blizzard prevented Calvin Klein representatives from getting to the meeting. At about the same time, Vans representatives called Lyman about sponsoring the music festival, and Lyman accepted their offer. The festival has been called the Vans Warped Tour ever since.

The Vans Warped Tour has been instrumental in launching numerous bands and musical artists over the years. Previously little-known artists such as Avenged Sevenfold, Fall Out Boy, Bebe Rexha, Paramore, Sum 41, and Katy Perry were propelled into the spotlight thanks to the Vans Warped Tour. Perhaps most notably, the Black Eyed Peas were given a chance to perform at the Vans Warped Tour in 1999. This was the first time a group that wasn't categorized as a punk band played at the music festival. Over the years, lineups have featured artists and groups that perform many different music genres, including pop and alternative rap. Ice-T performed on the 1999 Warped Tour along with Eminem. Katy Perry's Warped Tour appearance happened in 2008, and she performed "I Kissed a Girl" and "Hot N Cold." Every year, the Vans Warped Tour has released a compilation CD that coincides with the tour, featuring songs performed by artists participating in the festival that year.

The End of the Vans Warped Tour

Lyman successfully put on the Vans Warped Tour for many years, but in 2018, Lyman announced that the touring music festival would be ending. There were rumors about why the Warped Tour was ending, but Lyman insisted that his reasons for ending it centered around changes in the punk rock community. The unity that brought artists and fans together for the tours had waned; in later years, bands that were invited to perform on the tour declined because they didn't want to perform with some of the other bands.

In 2019, the Vans Warped Tour held concerts in Cleveland, Ohio, Atlantic City, New Jersey, and Mountain View, California. More than 50 bands played on multiple stages, and extreme sports such as skateboarding and motocross were also featured. Festival-goers were also treated to an art exhibit with pieces connected to the tour's history to wrap up the final Vans Warped Tour.